In the previous two posts I discussed mostly about the philosophy and attitude of developing with testing.
In this post I give some tips and tools examples for testing.

JUnit
http://junit.org/
There’s also TestNG, which is great tool. But I have much more experience with JUnit so I will describe this framework.
1. Use the latest version.
2. Know your testing tool!

hamcrest
http://hamcrest.org/JavaHamcrest/
This library is “extension” of JUnit.
I can’t work without it 🙂
Hamcrest library gives us out-of-the-box matchers.
Matchers are used with the assertThat(...,Matcher) flavor.
I almost always use this flavor.
(In the previous post, someone suggested that I shouldn’t use assertTrue(…), but instead use assertThat.)

There are plenty type of matchers:
You can verify existing objects in collection ignoring order.
You can check greater than.
The test is more readable using the assertThat + matcher.

You can create your own Matcher. It’s very easy.
Here’s an example of matchers that verify Regular Expressions. https://github.com/eyalgo/junit-additions

mockito
https://code.google.com/p/mockito/
This is the second library I can’t work without.
It lets you mock dependencies of the class under test.

Using mockito you mock dependency.
Then you “tell” the mock object how to behave in certain inputs.
You tell it what to return if some input entered.
You can verify input arguments to a called method.
You can verify that a certain method was called (once, never, 3 times, etc.)
You can check the order of method / mocks calls.

JBehave
http://jbehave.org/
JUnit, mockito, hamcrest are used for unit tests.
JBehave is not exactly the same.
It is a tool for Behavior-Driven-Development (BDD)
You write stories which are backed up by code (Java) and then you run them.

JBehave can be used for higher level tests, like functional tests.
Using JBehave, it’s easier to test a flow in the system.
It follows the Given, When, Then sequence.

If you take it to the next step, it can be a great tool for communication.
The product owner can write the scenarios, and if all is green, by the end of the iteration, then we passed the definition of done.

cucumber is another BDD tool.

Dependency Injection
In order to have testable code, among other things, you need to practice DI (dependency injection).
The reason is simple:
If you instantiate a dependency in a constructor (or method) of a class under test, then how can you mock it?
If you can’t mock the dependency, then you are bound to it. And you can’t simulate different cases.

Many application have Spring as the DI container, but less developers take the advantage of using the injection for testing.

Metrics
Use SONAR in your CI environment.
Check code coverage using cobertura or other tools.
Use Jenkins / Hudson / Other CI tool for automation.

IDE
Your IDE can help you writing tests.
For eclipse, I have two recommendations: 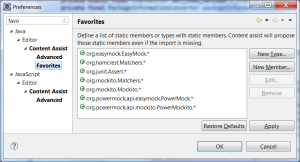 You can use profiles to separate unit testing with integration tests.

Follow Learning and Improving as a Craftsman Developer on WordPress.com