We’ve been working with git for more than a year.
The SCM was migrated from SVN, with all its history.
Our habits were migrated as well.

Our flow is (was) fairly simple:
master branch is were we deploy our code from.
When working on a feature, we create a feature branch. Several people can work on this branch.
Some create private local branch. Some don’t.
Code review is done one-on-one. One member asks another to join and walks through the code.

Introducing Pull Request to the Team

Recently I introduced to the team, with the help of a teammate the Pull Requests concept.
It takes some time to grasp the methodology and see the benefits.
However, I already start seeing improvements in collaboration, code quality and coding behaviors.

Others may call this section as disadvantages.
But the way I see it, it’s more of complaints of “why do we need this? we’re good with how things were till now”

In this section I will explain briefly the way we chose to use pull requests.
The screenshots are taken fron GitHub, although BitBucket supports it as well.

Branching From the “main” Branch

I did not write ‘master’ intentionally.
Let’s say that I work on some feature in a branch called FEATURE_A (for me, this is the main branch).
This branch was created from master.
Let’s say that I need to implement some kind of sub feature in FEATURE_A.
Example (extremely simple): Add toString to class Person.
Then I will create a branch (locally out of FEATURE_A):

After some work on the branch, and pushing it to GitHub, I can ask for Pull Request.
There are a few ways doing it.
The one I find “coolest” is using a button/link in GitHub for calling pull request.
When entering GitHub’s repository in the web, it shows a clickable notation for the last branch that I pushed to.
After sending the pull request, all team members will receive an email.
You can also assign a specific person to that pull request if you want him/her do the actual code review. 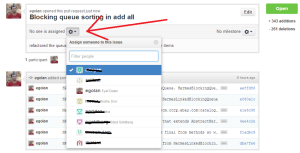 Changing the Branch for the diff

By default GitHub will ask to do pull request against master branch.
As explained above, sometimes (usually?) we’ll want to diff/merge against some feature branch and not master.
In the pull request dialog, you can select to which branch you want to compare your working branch.

Any pushed code will be added to the pull request.
Any team member can add comment. You can add at the bottom of the discussion.
And, a really nice option, add comment on specific line of code. 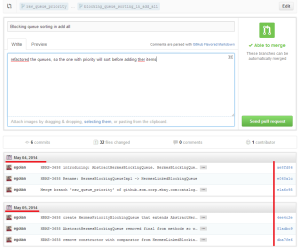 Merging and Deleting the Branch

After the discussion and more push code, everyone is satisfied and the code can be merged.
GitHub will tell you whether your working branch can be merged to the main (diff) branch for that pull request.
Sometimes the branches can’t be automatically merged.
In that case, we’ll do a merge locally, fix conflicts (if any) and then push again.
We try to remember doing it often, so usually GitHub will tell us that the branches can be automatically merged.

Branches can be automatically merged

After the pull request is merged, it is automatically closed.
If you are finished, you can delete the branch.

We found out that it most sensible that the person who initiated the pull request would merge and delete.
The merge will be only after the reviewer gave the OK.

Here’s a list of helpful git commands we use.

Follow Learning and Improving as a Craftsman Developer on WordPress.com